Ticket Sales Begin at 8:00 AM on February 1st

Sold in the office and at the door

GLENDORA, CA AND FROM THE JUNGLE OF NOOL TO KALAMAZOO, MARCH 3-6, 2022 – The Foothill Christian School Drama Department will unlock the imaginations of Glendora citizens when they bring the Cat in the Hat, Horton the Elephant, Gertrude McFuzz, Mayzie La Bird, the Whos in Whoville and other Seuss favorites to life with their production of Seussical JR., it was announced today by the Cat in the Hat and Drew Cohen, president and CEO of Music Theatre International (MTI). Co-conceived by Lynn Ahrens, Stephen Flaherty and Eric Idle, Seussical JR. combines Dr. Seuss tales (…and tails!) using the plinker-plunker of many musical styles – ranging from Latin to pop, swing to gospel, and R&B to funk – as colorful as the classic books.

“It takes a lot of creativity and focus to bring this whimsical world to life, while communicating its subtle themes and meaningful lessons,” says Cohen. “MTI hopes their audience outnumbers all the Whos in Whoville,” he adds. MTI, through its MTI’s Broadway Junior™ division, works with the authors of classic musicals to create special editions suitable for students to perform.

“Now, I’m here, there is no telling what may ensue with a Cat such as me, and a Thinker like you!,” says the Cat in the Hat.

Horton will hear a Who and cheerful chaos will ensue when the FCS Drama Dept. presents Seussical JR. on March 3-6, 2022 at Foothill Christian School (242 W Baseline Rd., Glendora CA 91740). Tickets sales are now open online (click on buttons above) and will also be for sale at the door.

Seussical JR. begins with a young boy named JoJo who conjures up the Cat in the Hat with his powerful imagination and is whisked to the Jungle of Nool for a fantastical adventure. There JoJo learns of the plight of the tiny citizens of Whoville, who live on a planet the size of a speck of dust. Their sole protector is Horton the Elephant, who is the only one with large and sensitive enough ears to hear them bipping and beeping and playing their oompahs. The small world is threatened by Sour Kangaroo and the Wickersham Brothers, who in disbelief that a world could be so small, try to steal the dust-speck so they can cast it into a vat of Beezle-Nut oil. During all of this drama, Horton has not noticed that he has an admirer, Gertrude McFuzz. She blames his indifference on her one-feather short tail and endeavors to find a way to change her looks. Meanwhile, Horton’s friend, Mayzie La Bird, is bored of perching on her nest, and convinces the watchful elephant to sit on her egg so she can take a vacation. The Cat follows all of these storylines and finally casts the boy into his own as the irresponsible son of Mr. and Mrs. Mayor of Whoville, JoJo, who ultimately saves his whole tiny world with one big, imaginative “think.”

Music Theatre International (MTI) is one of the world's leading theatrical licensing agencies, granting theatres from around the world the rights to perform the greatest selection of musicals from Broadway and beyond. Founded in 1952 by composer Frank Loesser, and orchestrator Don Walker, MTI is a driving force in advancing musical theatre as a vibrant and engaging art form.

MTI works directly with the composers, lyricists and book writers of these musicals to provide official scripts, musical materials and dynamic theatrical resources to over 70,000 professional, community and school theatres in the US and in over 60 countries worldwide.

MTI is particularly dedicated to educational theatre, and has created special collections to meet the needs of various types of performers and audiences. MTI’s Broadway Junior™ shows are 30- and 60-minute musicals for performance by elementary and middle school-aged performers, while MTI’s School Editions are musicals annotated for performance by high school students.

The mission of FCS Theatre Arts Department is to teach, inspire, disciple and enable the students, whether through music, acting, writing, dancing, directing or designing, to use their creative and artistic abilities to proclaim the Gospel of Jesus Christ. By utilizing the power of high quality drama, musical theater, and choral music to the school, the community directly and, by extension, throughout the world, all to the Glory of God.

The Junior High Performing Arts Department is under the Direction of Jennifer Robinson. The theater department has received many awards including “Best in Music” at the Junior Theater Festival in Sacramento, both in 2018 and 2019 and “Best in Acting” in 2020. They were awarded “Judges Choice” in both 2019 and 2020 at the SoCal Jr. Thespian Festivals, where they were asked to perform at both closing award ceremonies. Before that, they were awarded first place for “Musical Theatre Ensemble” and “Duo Theatre Scene” at the Christians in Theater Arts Festival, hosted by Azusa Pacific University. At this festival, our junior high students competed against high school students and attended various workshops. They were also finalists at the Candlelight Pavilion’s Got Talent competition, where they won the title “Audience Favorite”. Many of our graduates proceed to join theatre and drama programs in their high schools, local communities, and colleges.

Jr. High students may choose to join our International Thespian Troupe, #89389. The troupe has meetings, attends the Southern California Thespian Festival, and has been involved in several leadership training workshops.

The students are given a variety of performance opportunities throughout the year. A regular season at FCS would include the following events:

All School Talent Showcase: Students in grades K-8 can sign up to participate in this evening of celebrating various art forms. This show is hosted and run by the Thespian Troupe. It gives them the opportunity to work behind the scenes and learn the various aspects of technical theater and stage management.

Annual Gala Performance: The annual Gala is a large-scale evening of entertainment and dinner while administration shares the visions for continual improvement for the entire school.

Junior High Musical Production: This is a full scale, audition-based musical designed to allow students who are interested in acting, singing, and dancing perform in a major musical during the second trimester. Additionally, it is a co-curricular production, which simply means that the students rehearse (mostly), during school. This allows them to be available for other after-school activities. Students are also blessed to work with a professional choreographer. Musicals are performed with full scale sets, costumes and props with professional lighting and sound designers. Past major productions include Matilda Jr., Shrek Jr., Peter Pan Jr., James and the Giant Peach, Madagascar Jr., Beauty and the Beast Jr., Disney’s Aladdin Jr., Annie, Seussical, You’re A Good Man Charlie Brown, Godspell, and Roald Dahl’s Willy Wonka.

An evening of Plays, One-Acts, Short Scenes and Monologues: Each spring, the drama electives spend time working on short plays and monologues. They will learn basic acting and theater terms. Beginning and Advanced Drama classes will end the year with a final performance on the main stage.

The California Stage Junior High Thespian Festival is located at various schools throughout southern CA. These are one day events that all Thespians and current musical production cast members may attend.For a flier of a past festival click here: http://cetoweb.org/cst/wp-content/uploads/2019/10/...

iTheatrics Junior Theater Festival is an international festival where thousands of performing arts groups come together to perform, compete, and attend workshops and concerts. We travel to Sacramento where we spend 3 nights and 2 full days at events. https://juniortheaterfestival.com/jtf-program-2022... 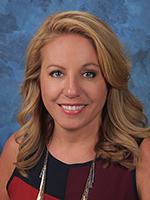 Jennifer Robinson is the chair of the performing arts department who has been teaching music and drama, as well as directing and producing shows for the past 17 years.

Jennifer is in her second term as a California State Thespian ‘Festival’ board member. She is also an active member of the Drama Teachers Association of Southern California, the California Educational Theater Association, and Director of the FCS Junior Thespian Troupe, #89389. As an active member of the theater community, she is continually attending classes and workshops for acting, directing, and musical theatre. Some of these include workshops in New York instructed by world renowned actors, directors, and choreographers. Additionally, she has worked throughout the local theater community. Some of her projects, outside of FCS, include designing and/or directing at Western Christian, The Grove Theater, and California School of the Arts. Jennifer received her Liberal Studies degree and teaching credential from Azusa Pacific University (APU). While attending APU she traveled with the University Choir and Orchestra, playing the flute and singing. Some of her favorite productions she has directed at Foothill include The Little Mermaid, Matilda, Beauty and the Beast, Shrek, Aladdin, Seussical, and Godspell.

James and the Giant Peach Jr. 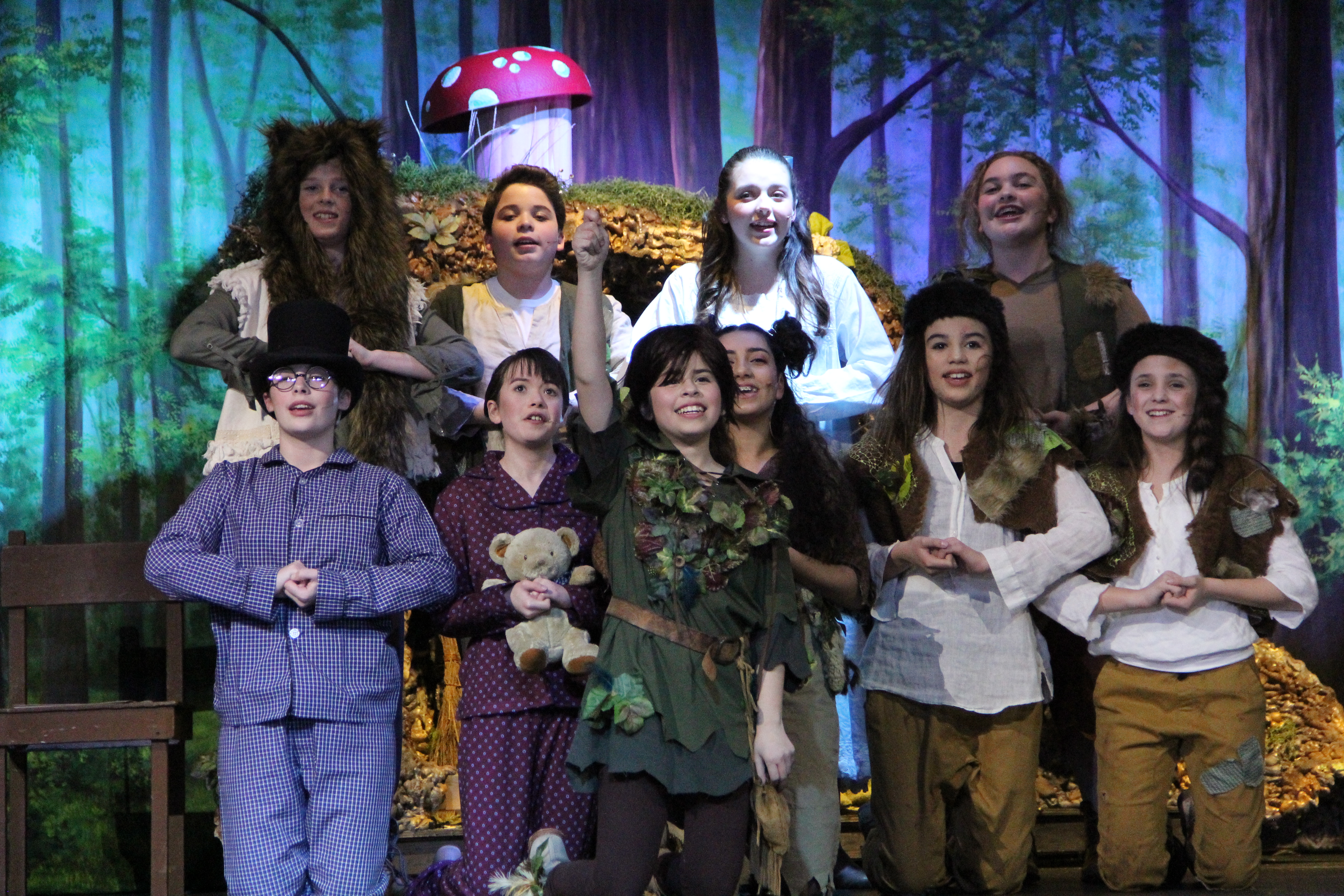 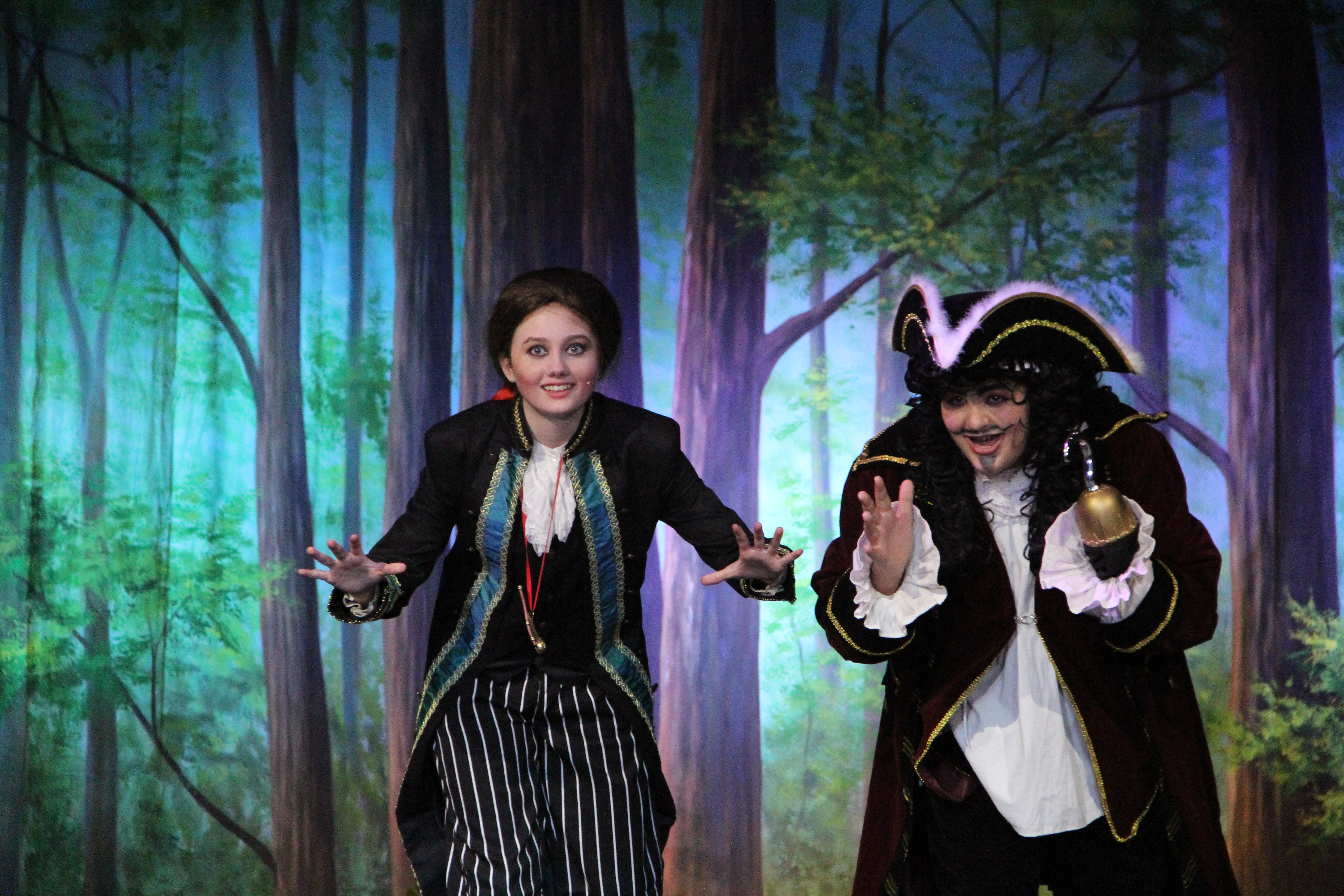 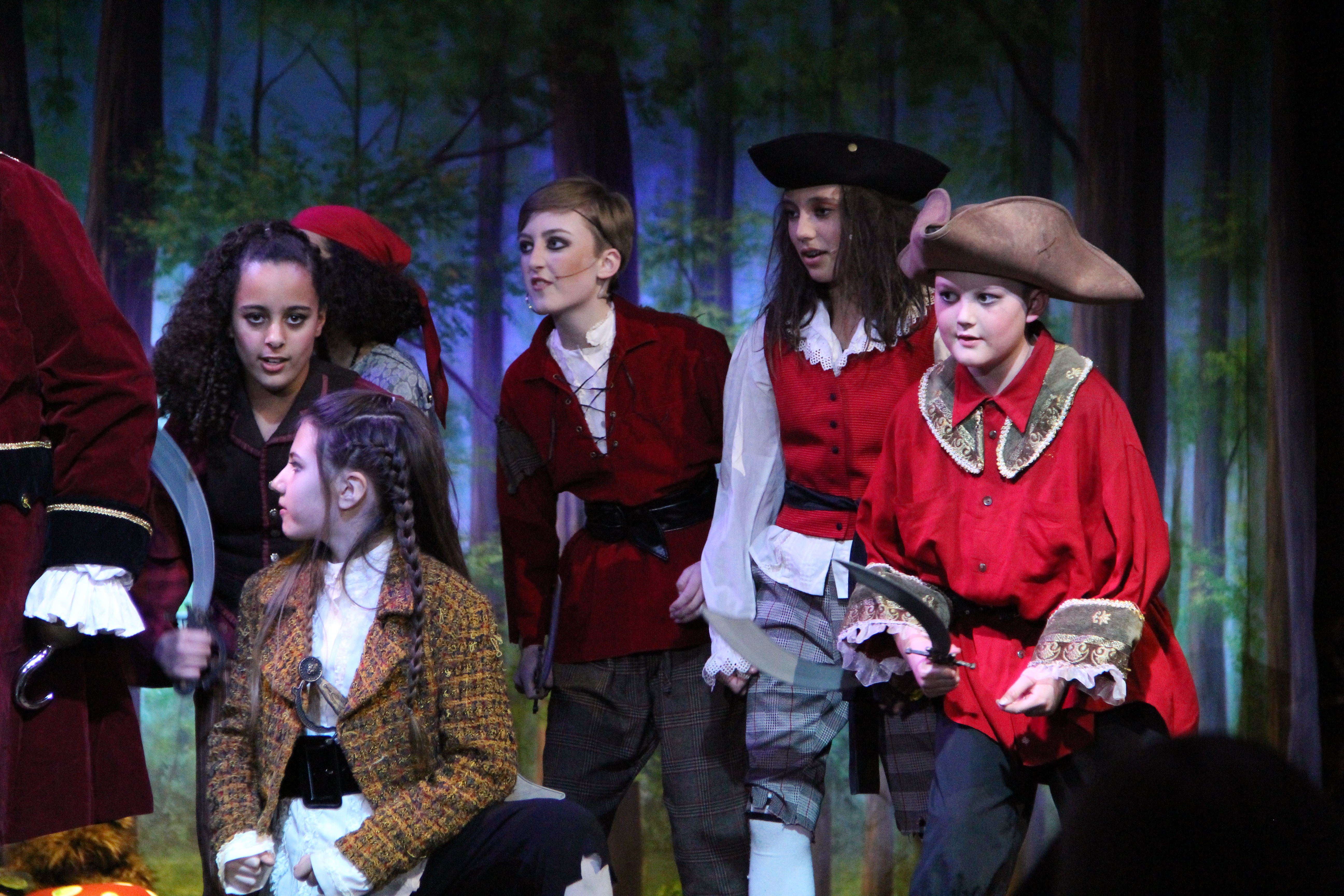 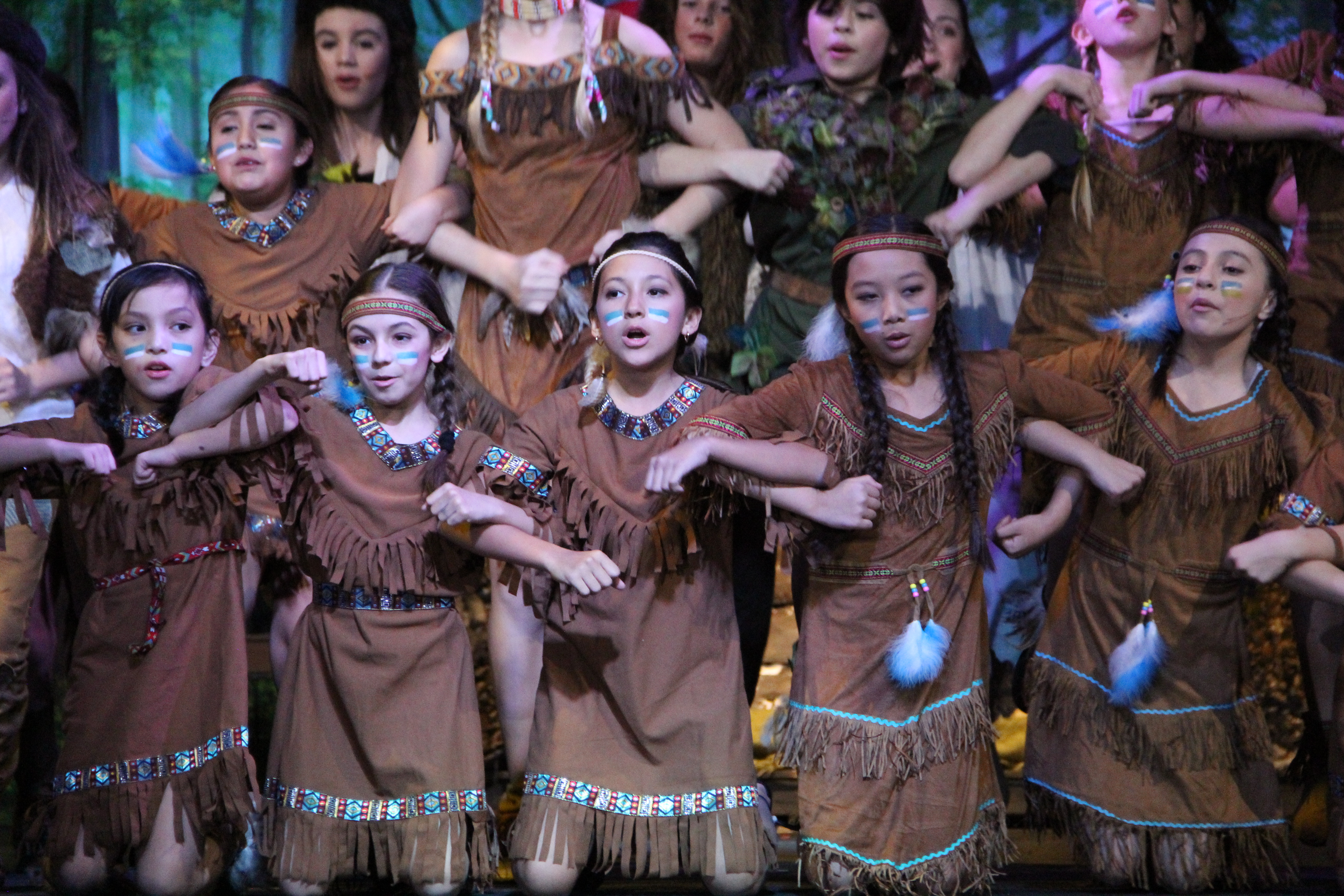 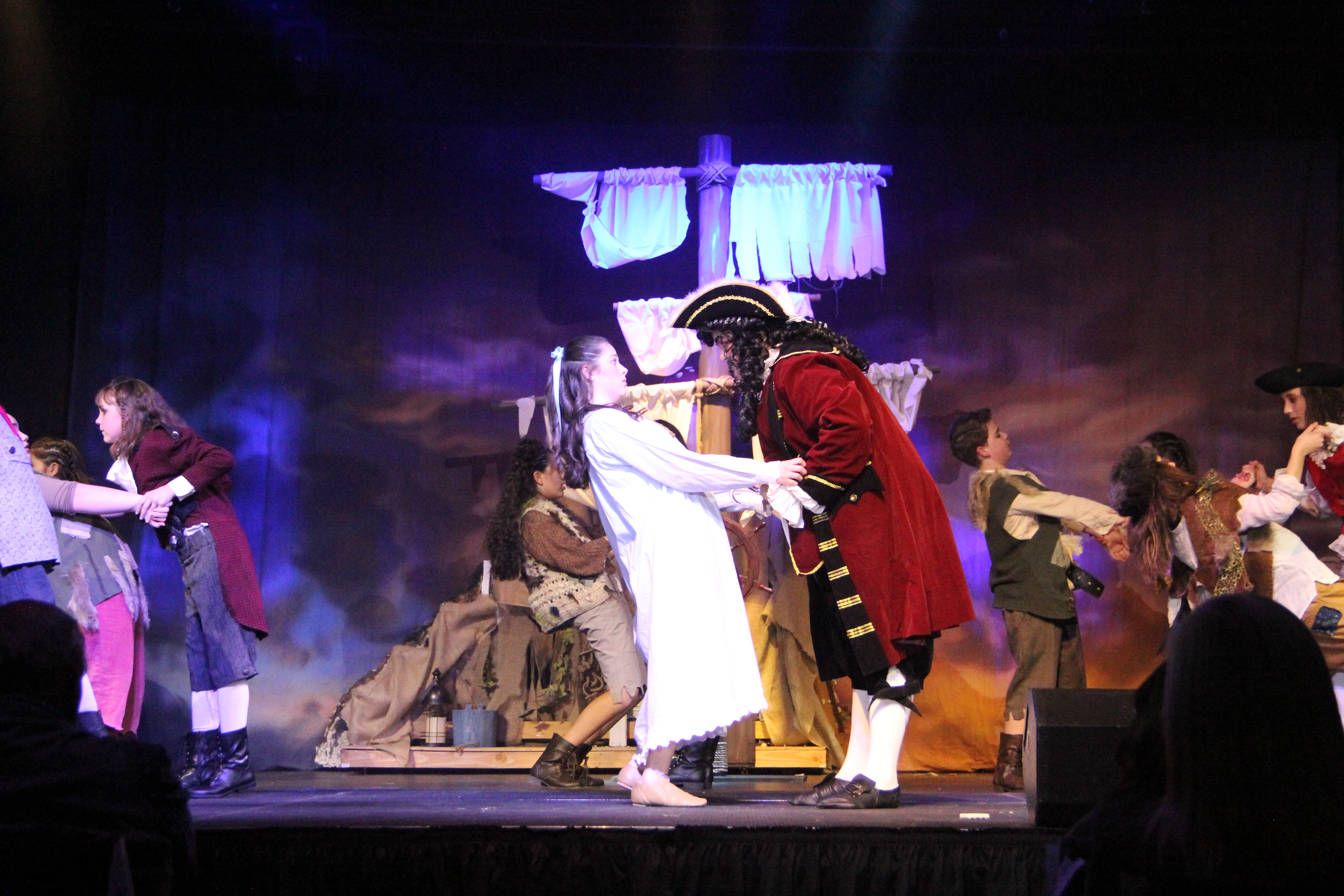 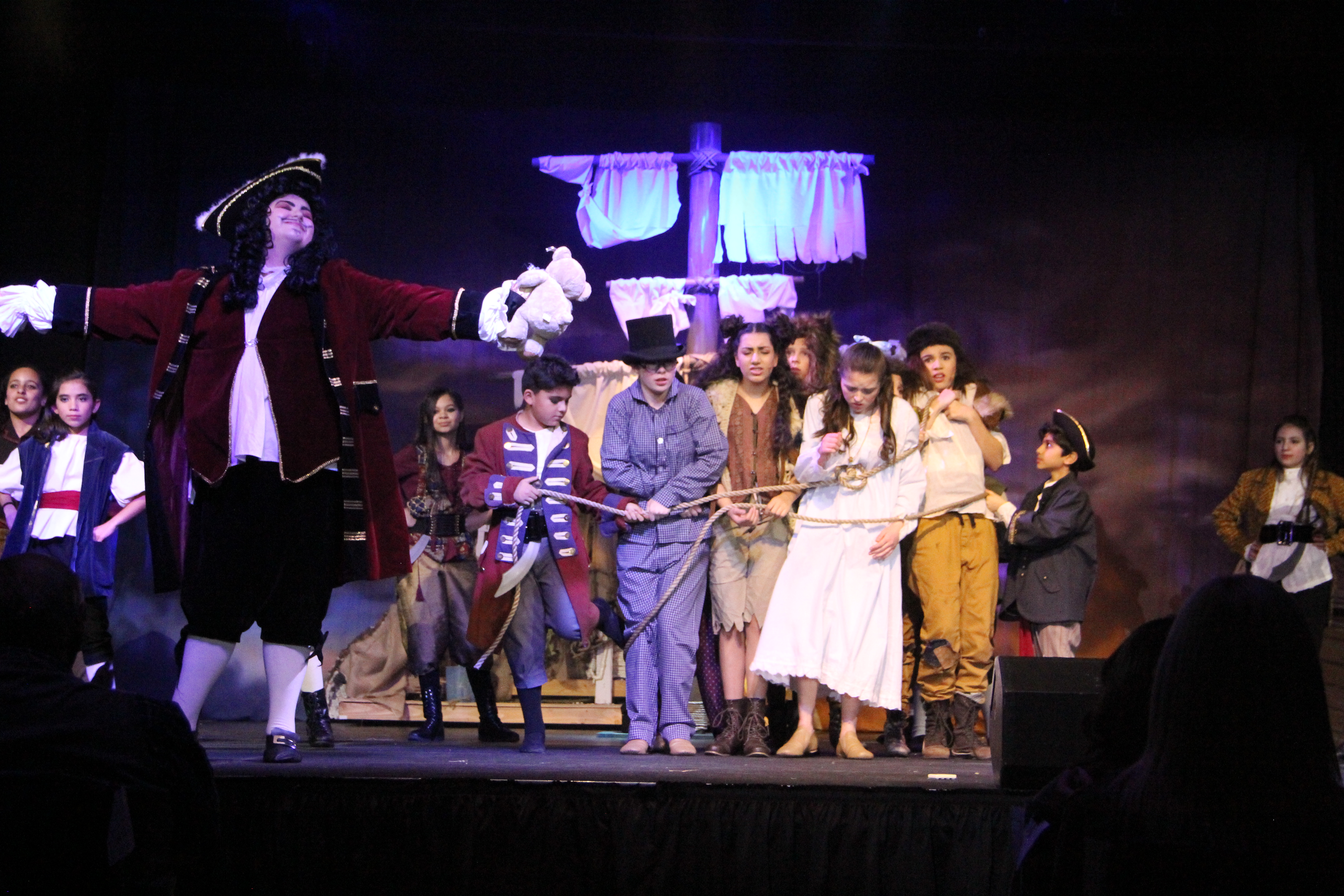